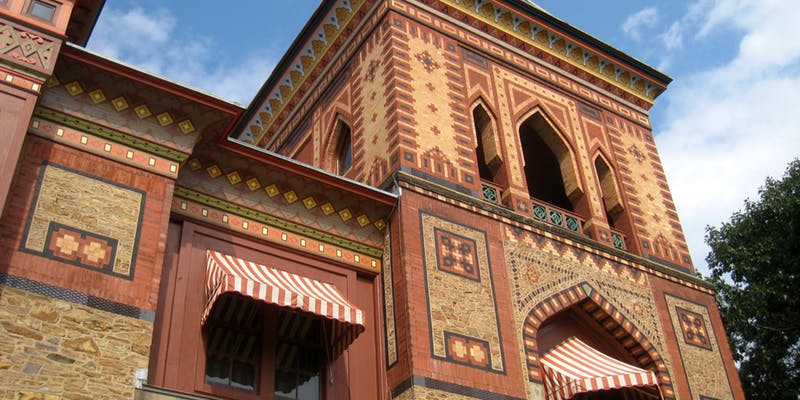 A talk exploring Orientalist eclecticism in architecture through the work and ‘houses beautiful’ of artists F. Church and F. Leighton.

This talk centres on themes of American Orientalism as seen through the work of New York-based artist Frederic Church (1826-1900) and his home, Olana, in the Hudson Valley of New York. This will be considered in contrast to the life and work of Frederic, Lord Leighton (1830-1896) and his home in West London. Frederic Church was an American landscape painter whose magisterial scenes are layered with Orientalist themes stemming from his Protestant religious beliefs. His home became his ultimate form of self-expression and is a prime example of Orientalist eclecticism in architecture. This talk considers how these elements of Church’s work were expressed in his personal residence while exploring the relationship and key distinctions between American and British approaches to Orientalism.
In collaboration with The Barakat Trust

Rebekah Coffman is an independent scholar based in Minneapolis, MN. She received her Bachelor of Arts in Art History with distinction, Religion, and Spanish from Hamline University in Saint Paul, MN and is a recent graduate of New York University’s London-based MA program in Historical Architecture. Her professional experience includes serving as the Ehlers Fellow in Decorative Arts at the Minneapolis Institute of Art, directing a locally and nationally registered historic religious building, and researching places of worship in East London through the Bartlett School of Architecture. Presently, she works with leaders of at-risk buildings through heritage documentation and stakeholder engagement.

She has been awarded prizes for her scholarship, including the Alfred D. and Hazel Stedman Writing Award, the Henriette Diebold Memorial Art Travel Award, the Monroe Bell Prize in Biblical Scholarship, and the Gavin Stamp Award in Adaptive Reuse.