CRESWELL’s CAIRO PHOTOGRAPHS AT THE V&A

A publication composed in March 2017 to accompany the Creswell Photographic Archive at the Victoria and Albert Museum in Kensington, London.

It provides a catalogue, digitisation and extensive data cross referencing. The publication seeks to allow this important photographic collection to be fully available online thus significantly increasing their outreach. The project is also combining documentation on looting and theft in Historic Cairo. The project is taking place for 7 months and will finish in April 2017.

Omniya Abdel Barr undertook intensive cataloguing and revisited the metadata to add more description and information alongside the names of the locations with the Arabic transliterations and translations included.

Since there is only one month left to complete the project Omniya Abdel Barr has decided to work full time as opposed to 3 days a week. The cataloguing has proven to be time consuming.

To raise awareness of the Creswell photographs two public presentations were made. The first in London occurred during the Fifth Biennial HIAA symposium that took place at the Courtauld Institute of Art in London from October 20thto 22nd 2016. The Creswell Photographs were presented and the history of their acquisition whilst also emphasising their historical and cultural importance. The second presentation took place in Cairo on the 19th of February at the Museum of Islamic Art. The lecture was very well attended and was presented by the director of the museum. It was later mentioned in the local press al-Masri al-Yum: http://www.almasryalyoum.com/news/details/1091568.

Opportunities networking with other institutions also arose. She has had several discussions with the different institutions holding photographs of Cresswell. She is proposing to set up a Cresswell online network which will enable all the Cresswell photographs scattered amongst the 5 institutions and one private collection to have a common online platform. In January she liaised with Ola Seif from the RBSCL/AUC and diccussed the process of collating the V&A’s collection with AUC. She has also visited the Ashmolean museum to get to know their collection.

There will be further research conducted. Photographs from the collection are identified and put in a list as they hold architectural elements today lost, such as the inscription panel which used to be at the wooden screen of the ladies mausoleum at the funerary khanqah of Sultan Faraj ibn Barquq. The high resolution of the scanning allow a zoom in at the Creswell’s photograph. This is extremely useful as it is an evidence of the item now lost for future identification and restauration. 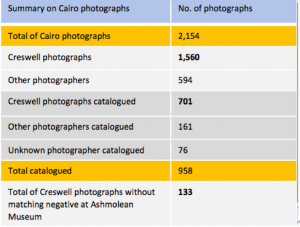 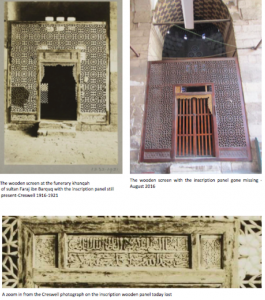