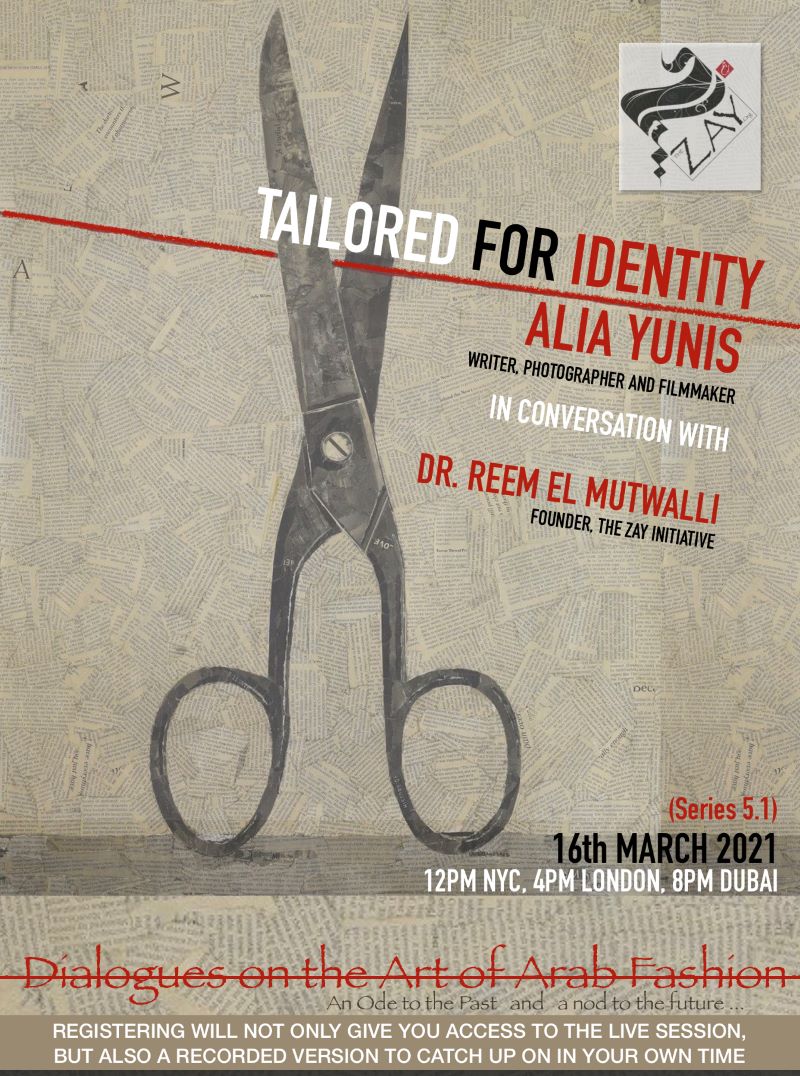 5.1 DIALOGUES ON THE ART OF ARAB FASHION: TAILORED FOR DRESS

The Zay Initiative aims to promote an understanding of the evolution of regional culture, building up public awareness and appreciation of this unique heritage, reaching out to like-minded individuals and institutions nationally, regionally and globally. In addition to seasonal or touring exhibitions and museum loans, the collection is accessed through the digital archive (Collection), first of its kind on a regional level, fortified by a pop-up glossary in both Arabic and English. The Zay Initiative aims to empower women regionally and globally by bringing their untold stories to life.

The Five Pillars of the Zay Initiative are: • Collect, document and conserve Arab dress and adornment.• Present and contextualise through a digital archive and blog.• Encourage intercultural dialogue to highlight our shared humanity.• Inspire and educate designers to create for a sustainable future.• Empower women regionally and globally by bringing their untold stories to life.

We look forward to welcoming you to this dialogue.

OUR GUEST: ALIA YUNIS
Alia Yunis, Writer, Photographer and Filmmaker has worked on projects on five continents, focusing her writing, photography and filmmaking on Middle East and Mediterranean culture.

Her most recent documentary, The Golden Harvest (2019), made its debut at Thessaloniki International Film Festival, won Best of the Fest at its US debut at the Minneapolis St. Paul International Film Festival and has gone on to play in several other festivals. A PEN Emerging Voices Fellow, Alia spent many years in Los Angeles as a screenwriter and script analyst for companies such as Warner Bros. and Miramax. Her novel, The Night Counter (Random House 2010), was critically-acclaimed by the Washington Post, the Boston Globe, and Entertainment Weekly and several others.

In 2010, she co-founded the Zayed University Middle East Film Festival (ZUMEFF), now the longest running film festival in the Gulf. Her fiction and non-fiction work has appeared in numerous books, magazines and anthologies and been translated into eight languages. Born in Chicago, Alia grew up between Lebanon and the USA and holds a PhD from the University of Amsterdam. She is currently teaching film and new media and heritage studies at NYU Abu Dhabi.

OUR FOUNDER: DR. REEM EL MUTWALLI
Dr Reem Tariq El Mutwalli, is a published author, lead curator and public speaker. With over 30 years of experience, she is an expert consultant in Islamic art and architecture, interior design, historic dress and UAE heritage.