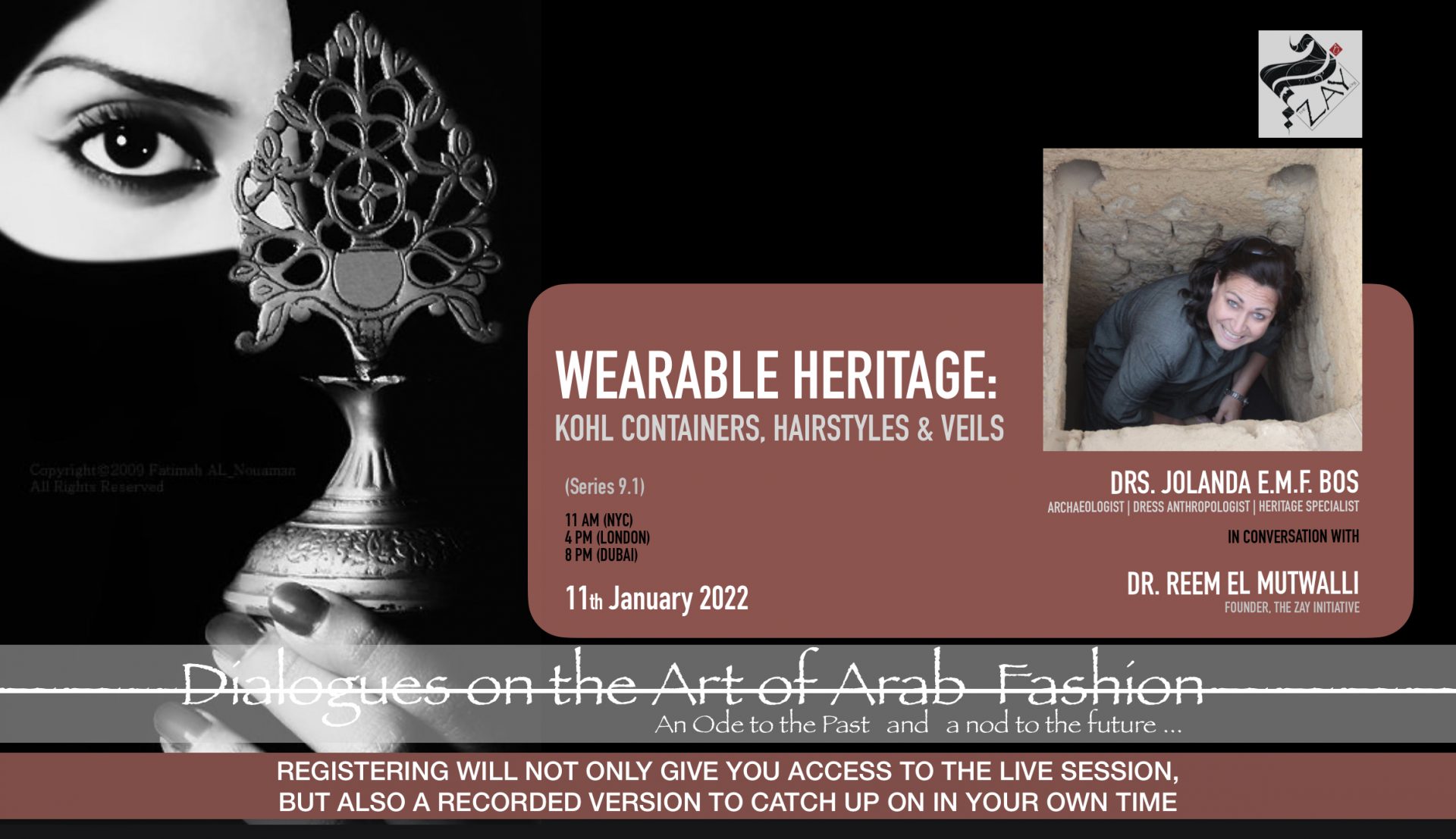 We very much look forward to you joining our first webinar of 2022 on Tuesday 11th January, Dialogues on the Art of Arab Fashion: Wearable Her-itage: Kohl containers, Hairstyles & Veils with Dr Reem El Mutwalli, Founder of The Zay Initiative in conversation with Jolanda Bos.

GUEST SPEAKER: JOLANDA BOS
Jolanda Bos is an archaeologist and dress anthropologist. At present she studies ancient Egyptian hairstyles from Tell el-Amarna, Egypt, at the University of Leiden (the Netherlands) as part of her PHD research. Jolanda’s other research fields comprise archaeological beadwork anal¬ysis, contemporary costume from the West Asia and North Africa, personal adornment (the combination of dress, body decoration, veils, jewelry and amulets) and the social implications of dress. Over the last thirty years Jolanda worked at several excavations in Egypt (at present at Tell el Amarna, Egypt) and the Netherlands, as well as on museum exhibits both in the Netherlands and in Egypt.

Jolanda is the author of several articles and books (i.e., ‘Paint it, Black’ and ‘Egypt’s Wearable Heritage’), and regularly lectures on the subject. She is also the driving force behind Wearable Heritage. For the Zay Initiative, Jolanda will introduce you into the world of personal adornment, make-up and – more specifically – kohl containers.

Since ancient times, applying kohl to the eyes has been an important tradition in the West Asian and North African region. This probably started as early as the Bronze Age and still exists today. In the present as well as in the past, the material was pulverized and stored in containers.

Jolanda Bos recently published a book on the history of these bottles and flasks. She has been collecting different kohl containers for over twenty years and tells the story about the different values of these objects and the meaning that kohl has had throughout history. ‘Paint it, Black’ is the first book its kind. It is richly illustrated with hundreds of photographs of ancient and more recently produced objects. In her research Jolanda didn’t just focus the different shapes of kohl containers throughout the ages, but also on the question why the objects have their specific shape and what these shapes symbolize in different cultural settings.