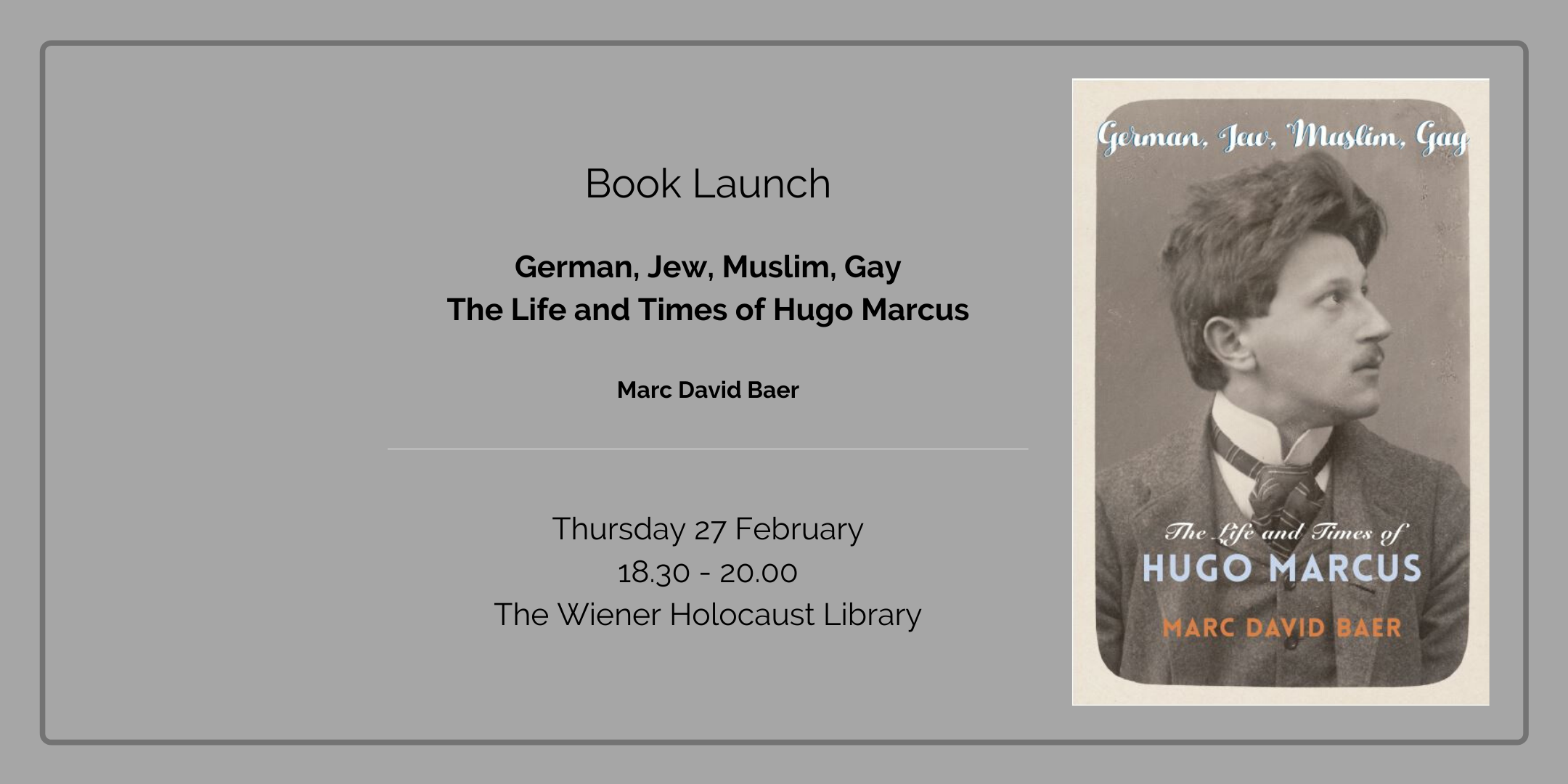 The Wiener Holocaust Library is pleased to launch the publication of German, Jew, Muslim, Gay: The Life and Times of Hugo Marcus by Marc David Baer.

Hugo Marcus (1880–1966) was a man of many names and many identities. Born a German Jew, he converted to Islam and took the name Hamid, becoming one of the most prominent Muslims in Germany prior to the Second World War. He was renamed Israel by the Nazis and sent to the Sachsenhausen concentration camp before escaping to Switzerland. He was a gay man who never called himself gay but fought for homosexual rights and wrote queer fiction under the pen name Hans Alienus during his decades of exile.

In this talk, based on his forthcoming book, Marc David Baer uses Marcus’s life and work to shed new light on a striking range of subjects, including German Jewish history and antisemitism, Islam in Europe, Muslim-Jewish relations, and the history of the gay rights struggle. Baer explores how Marcus created a unique synthesis of being German, gay, and Muslim that positioned Johann Wolfgang von Goethe as an intellectual and spiritual model. Marcus’s life offers a new perspective on notions of sexuality and competing conceptions of gay identity in the multilayered world of interwar and postwar Europe. His unconventional story reveals new aspects of the interconnected histories of Jewish and Muslim individuals and communities, including Muslim responses to Nazism and and Muslim experiences of the Holocaust. German, Jew, Muslim, Gay illuminates the complexities of twentieth-century Europe’s religious, sexual, and cultural politics.

Marc David Baer is a Professor of International History at the London School of Economics and Political Science. He is the author of five books: Honored by the Glory of Islam: Conversion and Conquest in Ottoman Europe (2008); The Dönme: Jewish Converts, Muslim Revolutionaries, and Secular Turks (2010), At Meydanı’nda Ölüm: 17. Yüzyıl İstanbul’unda Toplumsal Cinsiyet, Hoşgörü veİhtida (Death on the Hippodrome: Gender, Tolerance, and Conversion in 17th century Istanbul, 2016); and the forthcoming German, Jewish, Muslim, Gay: The Life and Times of Hugh Marcus and Sultanic Saviors and Tolerant Turks: Writing Ottoman Jewish History, Denying the Armenian Genocide.