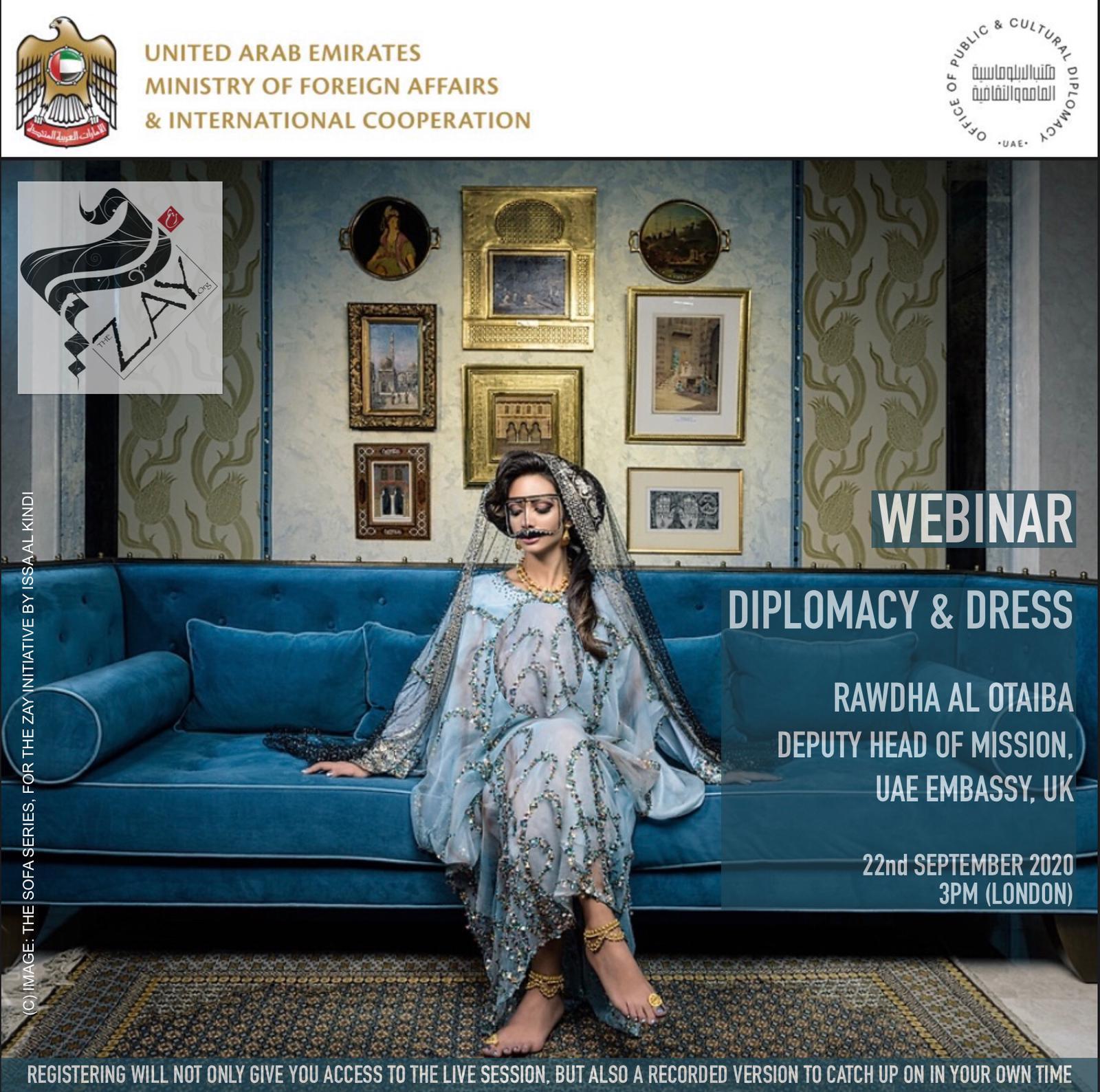 DIALOGUES ON THE ART OF ARAB FASHION: Diplomacy & Dress

DIPLOMACY & DRESS
Join us on the Sofa as Rawdha Al Otaiba speaks to Dr Reem El Mutwalli on Diplomacy & Dress.

Join us for our next dialogue – ‘Diplomacy & Dress’

Rawdha Al Otaiba has been the Deputy Head of Mission at the Embassy of United Arab Emirates accredited to the UK since 2016. She formerly served as the Director of American Affairs Department at the Ministry of Foreign Affairs & International Cooperation (MoFAIC), during which time she was responsible for bilateral relations between the UAE and the Americas. She has also served in the Directorate of Energy and Climate Change (DECC) as the head of IRENA section, liaising with the International Renewable Energy Agency (IRENA) and overseeing the UAE’s IRENA host country affairs. She also represented the UAE as an active member state to IRENA, and helped lead the UAE’s negotiating team for Rio+20. Additionally, she was a member of the team working on the development of the UAE’s sustainability-related foreign and domestic policy. In 2009, she joined the UAE task force for IRENA campaign, which ended successfully with the UAE hosting the agency. In 2003 she served in the American Affairs Department in MoFAIC and was responsible for the US file.

Rawdha graduated from UAE University with a Bachelor’s degree with Honours in Political Affairs, and a Masters degree in Public Diplomacy with Honours.

Dr Reem Tariq El Mutwalli, is a published author, lead curator and public speaker. With over 30 years of experience, she is an expert consultant in Islamic art and architecture, interior design, historic dress and UAE heritage.

Raised in the Middle East, educated in the UK, Emma has a profound understanding and passion for bridging gaps regarding culture and business, whilst navigating geo-political environments.

As the Festival Director of Dubai Lynx from 2011 to 2016, she strategically grew the event and left a legacy, building the foundations that sees the festival thrive across multiple markets today. Now an entrepreneur and mother, Emma set up ‘Chameleon’, helping businesses reach their potential whilst ensuring they do better for good.