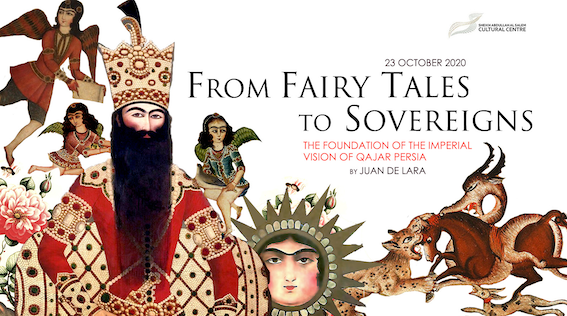 From Fairy Tales to Sovereigns: The Foundation of the Imperial Vision of Qajar Persia – An online seminar with Juan De Lara

Join the Shaikh Abdallah Al-Salem Cultural Centre in Kuwait for a virtual talk from the Islamic Art Series, “From Fairytales to Sovereigns andThe Foundation of the Imperial Vision of Qajar Persia” by Juan De Lara, Cultural Programme Manager at Asia House.

In this talk he will discuss the Qajar dynasty (1785-1925) in Persia as they thrived as a political regime by adapting their nomadic-tent identity to fit the urban setting inherited from the previous Safavid and Zand rulers.
This also meant that they built upon the visual and cultural references of their immediate predecessors, yet one unique feature of their art is that the Qajars were historicising and referenced directly ancient Pre-Islamic cultures of Iran, of which they were well-aware.In this process, they turned their eyes to the incorporation of forms of monumentality that drew directly from Achaemenid, Sogdian and Sassanian art—a revival movement to legitimise their rule as inheritors of Persian culture.

This talk unfolds these narratives, tales and pseudo-imaginary characters that shaped the artistic and cultural style of the Qajars—with the ultimate consequence of reinforcing and consolidating notions of Iranian history that are still deeply entrenched in the identity of the country.