Born in Alexandria, Egypt, in 1943, Dr. Ahmed Moustafa is an artist and scholar of international repute and a leading authority on Arabic art and design. Initially trained as a figurative artist in the neoclassical European tradition, and drawing his inspiration primarily from Renaissance masters, he subsequently rediscovered his Islamic roots, and his work is now almost exclusively devoted to abstract compositions inspired by texts from the Holy Qur’an. He has created an astonishingly rich visual vocabulary through an innovative fusion of his skills as a painter and as a master scribe in the tradition of Islamic penmanship.

Dr. Moustafa has lived and worked in London since 1974 and directs the Fe-Noon Ahmed Moustafa Research Centre for Arab Art and Design, which he established in 1983. He has taught and lectured in many parts of the world, and is currently a visiting professor at the Prince of Wales’s Institute of Architecture, London, the University of Westminster, London, and the Faculty of Fine Arts, University of Alexandria, Egypt.

He was recently been appointed to a Fellowship in Islamic Art at the Oxford Centre for Islamic Studies.

He has had recent exhibitions at the Mathaf Gallery, London (2008), The British Museum (2006) and Ackland Art Museum at the University of North Carolina (2004/5). He has also exhibited at the Royal Academy, King’s College Cambridge, The Whitechapel Gallery, The Embankment Gallery, The Ashmolean Museum, The Musee Rath, Geneva Switzerland, Pontificia Universitas Gregoriana in the Vatican and a number of other venues.

In 2009, Dr Moustafa’s work, Gratitude and Remembrance, auctioned at Christie’s, broke an international record for having the highest auction estimate for a piece of work by a living Arab artist. His work can be found in the collections of The British Museum, The Ashmolean, The National Museum of Scotland, The Islamic Arts Museum – Malaysia, The National Gallery of Sarajevo, The Museum of Modern Arts, Alexandria – Egypt, and The Pontificia Universitas Gregoriana, at the Vatican, among others.

Image above: Transcendental Mansions of the Moon. 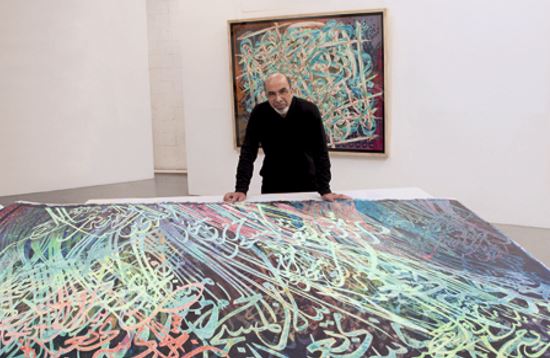 The artist with one of his works, Night Journey and Ascension.