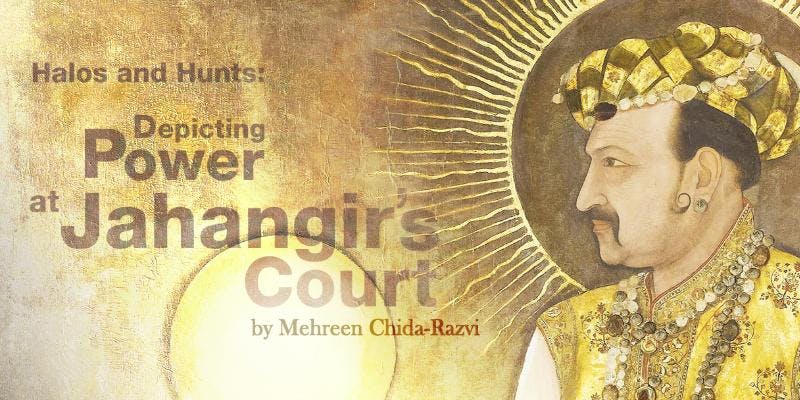 The reign of the third Mughal emperor, Jahangir (r.1605–27), is fascinating for the innovative and vibrant art, architecture and material culture it produced. It ushered in an era of great political, diplomatic, economic and cultural interaction between the Mughal Empire and much of Europe and Asia, factors that played a role in advancing the aesthetic of Mughal art. Jahangir devoted much time and thought to artistic patronage, and one significant result of the multicultural nature of his court was the creation of sophisticated visual representations of power. This talk, presented by Dr. Mehreen Chida-Razvi, will explore a particular aspect of these representations: the adoption and adaptation of European and Christian imagery to symbolically portray Jahangir’s political power and the prestige of the Mughal court. Focusing on portraits of the emperor, the discussion will centre around how and why Jahangir and his artists incorporated motifs like the halo, angels, saints, and the globe into Mughal paintings.

Dr Mehreen Chida-Razvi is a Research Associate in the Department of the History of Art & Archaeology at SOAS. A specialist on the art and architecture of Mughal South Asia, she regularly teaches courses and lectures on Islamic and Indo-Islamic art history in London and Oxford. Additionally, she works for the Khalili Collection, is an Assistant Editor for the International Journal of Islamic Architecture, and is Course Tutor for Indian and Islamic art courses at SOAS and the Victoria & Albert Museum. Dr Chida-Razvi has published on seventeenth-century Mughal architecture and painting, Mughal-Persianate relations, European views of the Mughal Empire, and the social responsibility of architecture. She has shared her expertise with a wider audience through her participation in and consultation for documentaries on the Taj Mahal, programming on BBC World Service Radio and BBC2, and as an expert lecturer on cultural tours. She is currently finalising a book chapter on the Virgin Mary in Mughal architecture for a volume on Marian Iconography, is guest-editing a volume of the journal South Asian Studies, which will focus on Mughal Architecture and its relationship with the Persianate world, and writing a book on the patronage and production of Emperor Jahangir’s Mughal mausoleum.