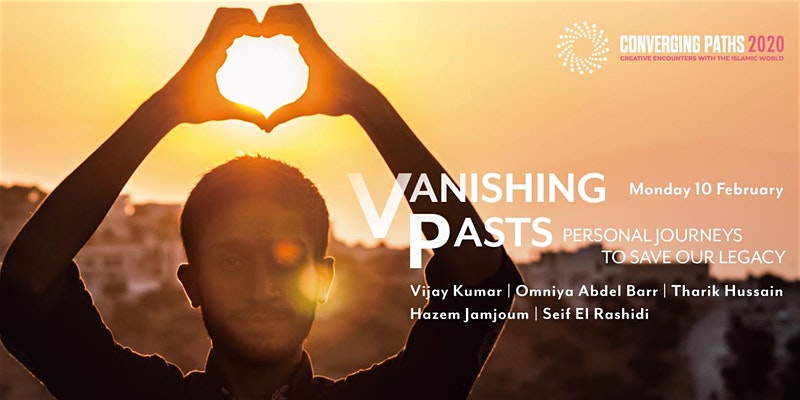 Vanishing Pasts: Personal Journeys to Save Our Legacy

A panel to discuss and present the personal efforts of talented people to preserve, restore and save our heritage

Among us are those whose calling is to work tirelessly to preserve and save our cultural heritage and artistic traditions. They safeguard valuable legacies from the recent and ancient past in danger of disappearance, threatened by the passing of time or by negligence. Join Hazem Jamjoum from The British Library, Omniya Abdel Barr from the Egyptian Heritage Rescue Fund, author Vijay Kumar and Tharik Hussain, journalist and travel writer, who will share their own personal journeys to preserve threatened heritage and vanishing memories from the Islamic world.

Vijay Kumar is the co-founder of India Pride Project, a social media initiative to combat the rampant looting of Indian art treasures and have been instrumental in the tracking of high profile trafficked artefacts for the past few years and work closely with various pan global organisations assisting in their restitution efforts.

Hazem Jamjoum is the Gulf History Audio Curator and Cataloguer at the British Library, and a doctoral candidate in Modern Middle East History at New York University. His work and research are focused on Arab audio recording industries of the early twentieth century.

Tharik Hussain is an award winning travel journalist and writer who has been discovering and writing about the lost and forgotten heritage of the Islamic world, including Muslim Europe. He produced the first trails of Muslim Heritage in Britain and is working on a book about the unknown Muslim heritage of Europe over the past fourteen centuries.

Omniya Abdel Barr is a conservation architect who is actively involved in the preservation of the cultural heritage of the Middle East. Through her work with the Egyptian Heritage Rescue Fund, she has been documenting Cairo’s disappearing medieval woodwork – and encouraging craftspeople and designers to seek inspiration from the past. She has also been coordinating dispersed collections of historic photos of the Middle East.

Seif El Rashidi (Moderator) is an architectural historian who has worked on the preservation of historic cities in the Islamic World, and on craft heritage. He has managed projects to encourage members of the public to engage with their heritage, both in the Middle East and the UK. He is currently director of the Barakat Trust.

This event is part of the series Converging Paths, a year-long series of events curated for 2020, and organised in partnership by Asia House and The Barakat Trust. With this series we aim to engage audiences in challenging cultural misconceptions about the Islamic world, building bridges between communities and highlighting the importance of the arts of that region. We aim to provide wider access, combining digital platforms and curated cultural programmes that appeal to adults and families.

The Barakat Trust and Asia House