Elissa Bullion received funds from the Trust to conduct human data collection in Samarkand, Uzbekistan on medieval human osteological materials. The overarching aim of the project was to collect demographic and morphological skeletal data for her dissertation. Her dissertation examines biological and religious diversity across the Qarakhanid Empire (9-13thcentury AD) to explore the impact of state ideologies and institutions during this period affect the movement of peoples and the spread of Islam.

During June and July 2016 she collected sex estimation, age estimation, non-metric and cranial shape data on 182 individuals. Initially her data site comprised of 3 comparative but thanks partially to the grant this expanded to 22 sites. And as such this made the purview of data greater. The remainder of her dissertation data will consist of additional excavations and analysis of individuals from Tashbulak as well as the collection of burial data from all sites. Moreover osteological data will be used to examine how people moved on the landscape whilst the burial data will be used to illustrate how state perpetrated ideologies (especially Islamic and Turkic identities) were integrated by various groups.

During the summer she also had the opportunity to work in the Archives of the Institute of Archaeology in Samarkand to identify records relating to the comparative sites which she had collected the data from. Consequently she was able to obtain reports and publications for nearly all her comparative sites. These reports however are all in Russian and she plans on translating them during the 2026-2017 academic year.

In late July 2016 after the bulk of her data was collected she had a further opportunity to travel to the Institute of Archaeology in Nukus, Uzbekistan. The aim of this trip was to investigate the possibility of gaining access to skeletal remains from an additional two sites from the Khoresm region in northern Uzbekistan (Kran Tau and Mizdakhan). This trip was very productive and she gained permission to return the following summer to collect data from the Kran Tau and Mizdakhan samples. She examined the remains while she was at the institute and confirmed that there are approximately 50-80 sets of well-preserved human remains (cranial and post-cranial elements) from these two sites. The addition of these two sites to her data set will allow her to conduct additional intra-site analysis. This will be especially important since many of her comparative sites thus far yielded only a small number of individuals. 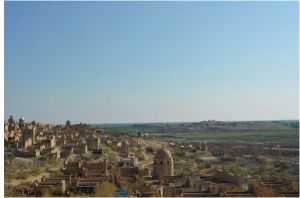